The Stand Ebook vs Present: The Greatest Modifications So Far

Stephen King begins The Stand, his apocalyptic three-book novel about good versus evil, just before a pandemic breaks out. What exactly happened – a spilled beaker, a dropped test tube, a torn protective suit – that led to the introduction of a government-induced fatal flu in a human, we may never know. How it got out of the facility is pretty clear. A working soldier named Campion made it through a door that was previously supposed to be locked automatically. On his escape he brought the deadly disease, nicknamed “Captain Trips”, across the base to his wife and daughter and into the world.

In this CBS All Access version of King’s The Stand this sequence takes place, but finds a place at the end of Episode 1 – “The End” – an indication that this adaptation of the story puts a heavy strain on the post-pandemic good against evil struggle and light on how the flu spread and billions died.

After a brief joke from mother Abigail (Whoopi Goldberg) telling someone or more than someone that God wants him to go west (a real axis that the book turns on), this TV version digs deep into the book II on The Survivors of Mankind, Harold Emery Lauder (Owen Teague) – a Boulder, Colorado Free Trade Zone resident – vomits while volunteering to clean up the remains of the months-long dead that littered the city.

While the book jumps from the point of view character to the POV character, its format is fairly linear. The only real exceptions are when King explains what happened at the same time to another POV character, but in a different location, or when someone has a supernatural dream. Here, however, the series often uses flashback and flashforward sequences to weave its story together.

Those who have read The Stand, which King added over a decade after it was first published (and it is this updated and currently available version that we use for comparison), know that it is a long novel. So if you summarize it in a limited series form – even with a span of 9 episodes – this will certainly lead to part of the ingredients being left out.

So let’s start with the meat that the first episode gave us: Harold.

A flashback introduces prepandemic Harold, a bullied high schooler who has a crush on his former babysitter (Frannie Goldsmith). He has a passion for writing, an even more passionate temperament (he splits his laptop in half after receiving a written rejection letter that also gets the series moving in time since the book mostly comes out in 1990) and the ability to go fast and without Grief to depart from the death of his family and his city. Instead, we see him almost gleefully planning his post-pandemic life with Fran – and practicing the lines for it. How deep his feelings for Fran go is definitely explored, but not as deathly as he paints their names while swaying on the edge of a barn roof (he just sprays them and the direction they are pointed at a wall) or carve their initials into a post. 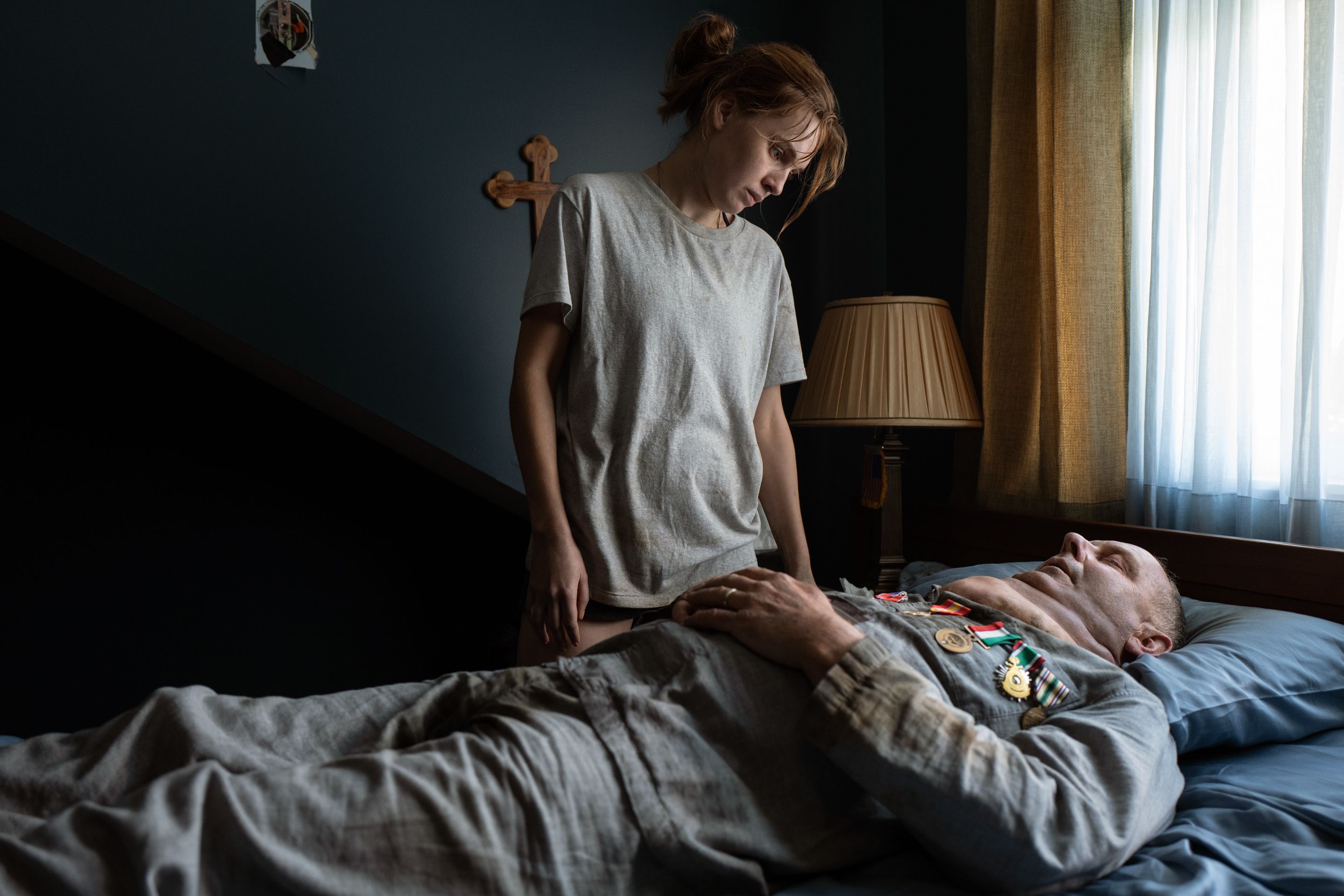 However, what we don’t get in this episode, at least, is Frannie’s (Odessa Young) extensive backstory. She is a key POV character in the novel, where readers spend a lot of time (at least more than Harold). Her pregnancy is hinted at in a flash-forward, but how she got pregnant is left out – as is the moving connection she had with her father.

In the series, Harold’s look through the fence reveals that Fran had something to tell her father, but the show leaves out whether that conversation ever took place. “The End” shows Fran dressing and burying her father after seeing Capt. Trips has succumbed – on the left, deaf, a quiet Fran hears the address of a coughing president, in which he emphatically claims that the US did not cause the flu in a laboratory. However, the series paints her grief with broad, wordless brushstrokes, and in a twist that isn’t taken from the book, Harold finds her passed out in a tub after swallowing a bottle of pills in a suicide attempt. He makes her vomit her up and gets a good shine – at least for a while.

In the first episode, we also meet the POV character Stu Redman (James Marsden), whose backstory describes his time as a military laboratory rat when they tried to use his flu immunity to find a vaccine. Marsden’s version of the character isn’t as timid as Book Stu, however, and happily undergoes various scans and fluid tests after a friendly doctor asked him what his late wife – a nurse – would expect of him.

In his interactions with doctors, captains, and even a General Starkey (Oscar winner JK Simmons making a surprise cameo), we get a Stu who is always looking for an escape route or information on how to break out of the Vermont facility he is limited to. He seems undoubtedly more courageous and imaginative (read: badass) than the book Stu, whose flight from the top secret place of government seems to be driven by primal instinct. 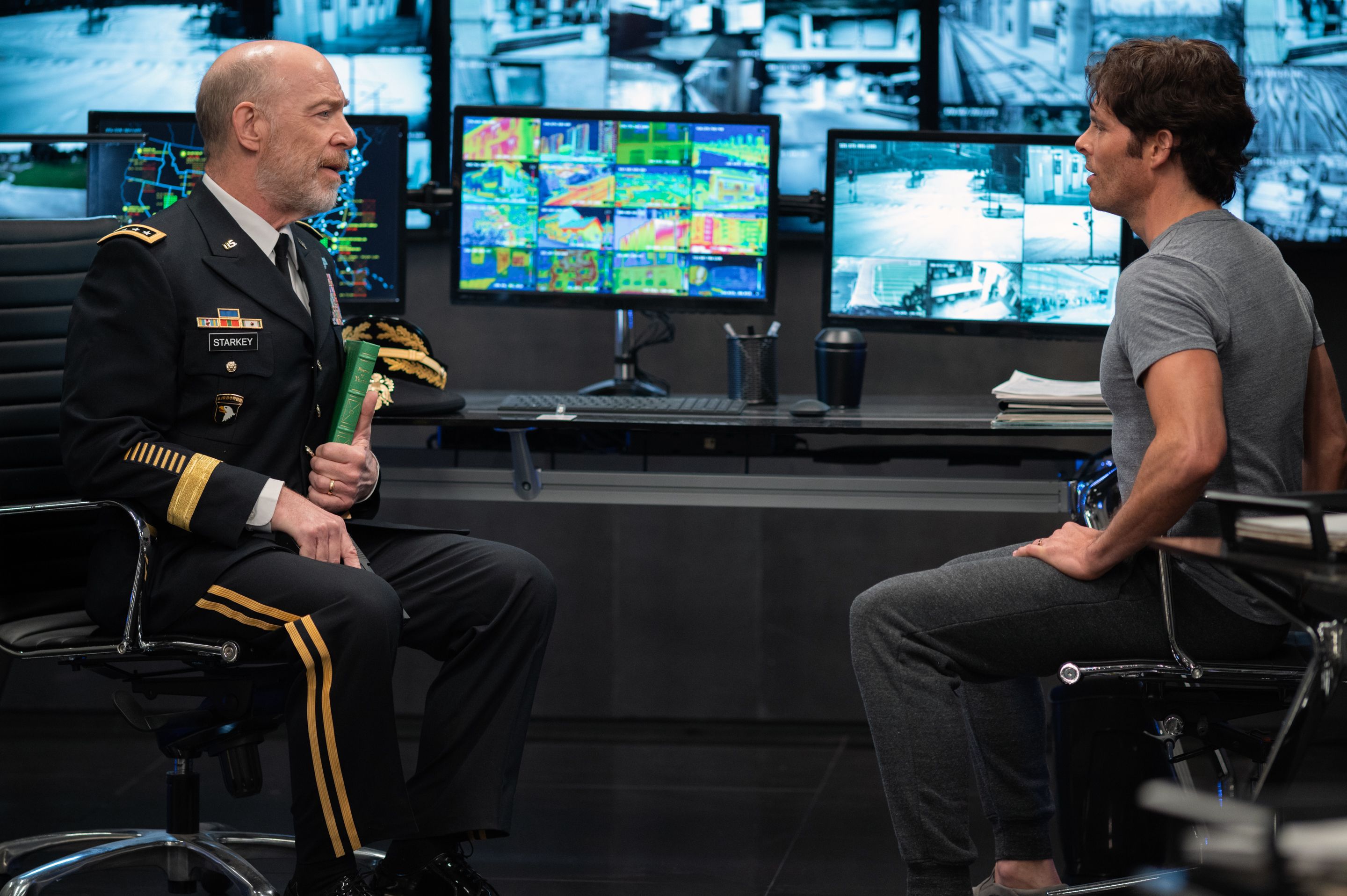 As the first episode concludes, Harold’s psychological development, which the novel explores, is briefly summarized. While he is respected in the Free Zone, he’s unwilling to let go of any new or old grudges – including a grueling one for Stu, who is romantically paired with Fran in the future. While there’s no time for their story of how Stu and Fran even met, the cut in the premiere is a montage of Harold practicing his playful face (a smile he models after Tom Cruise) that obscures his true feelings .

While the premiere shies away from introducing Nick, Lloyd, Tom, Glen, Larry, Nadine, Joe or Rita, another important character gets a few quick nods – Randall Flagg (Alexander Skarsgård). His typical western boots appear (hold the door open for Campion to escape), his shadow meets Harold in a dream sequence and the full Randall appears smiling in the back seat of Campion’s car as the virus-carrying man drives his family down the street – a much earlier one more complete look than in the book about the “bad” character in the story. 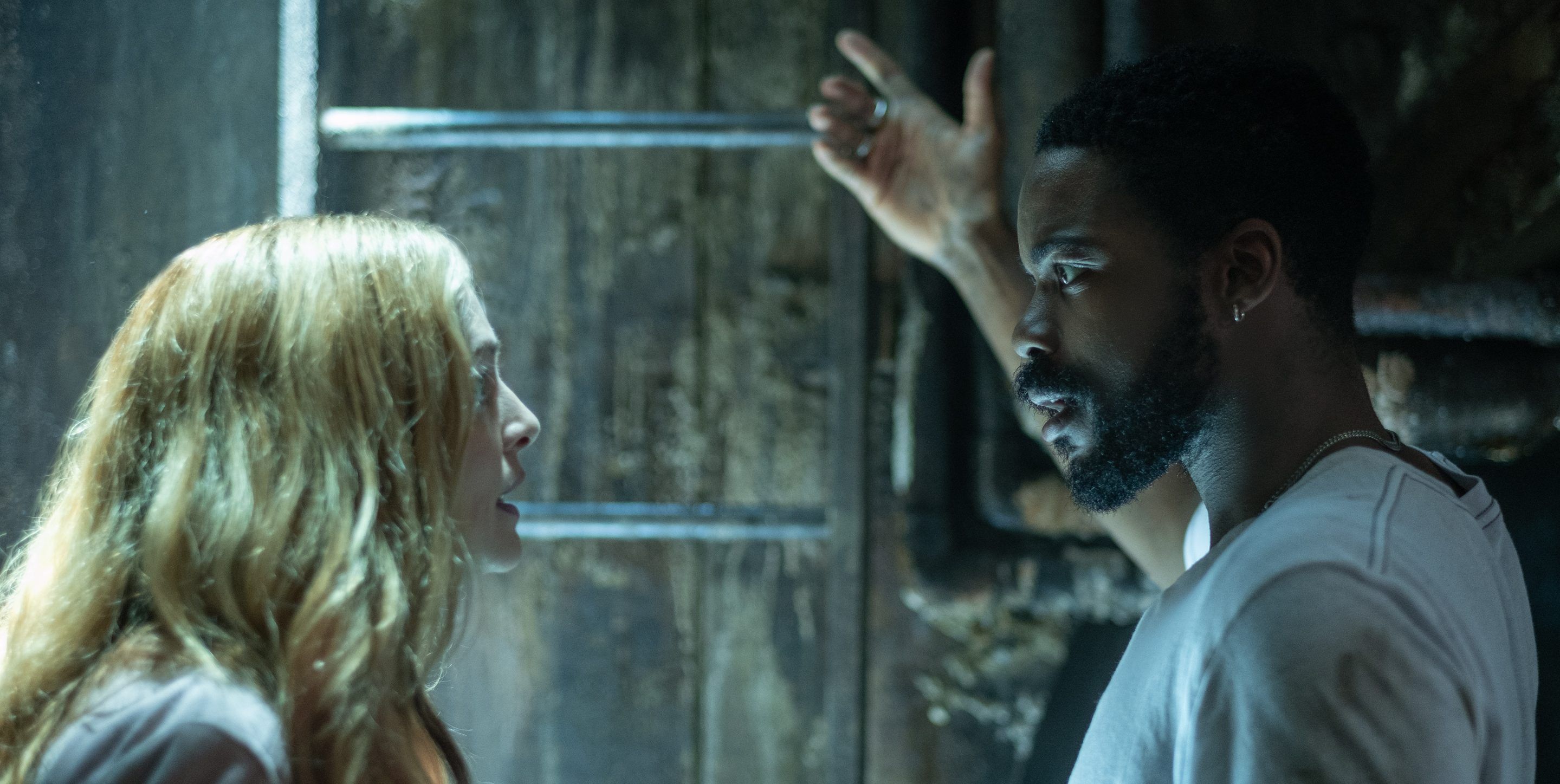 Larry and Lloyd were the focus The stand‘s second episode on CBS All Access. The story of how Lloyd Henried (Nat Wolff) ended up in jail (after an interstate robbery and murder frenzy with his deceased companion Poke, who was happy to be the trigger) is accelerated, but remains close to King’s narrative. This is how Lloyd’s gets out of jail, a not entirely free story that comes after Captain Trips killed everyone in his cell block and starved him and ate himself on a rat and his bunkmate’s calf. In another match between book and screen The stand finally introduces Randall Flagg (Alexander Skarsgard) with more than one dream scene as he strolls through the cell block hall and offers Lloyd the key to freedom in return for a promise of loyalty. Lloyd obviously accepts.

Musician Larry Underwood (John Adepo) is an African American character in this adaptation (he’s Caucasian in the book) and instead of quietly returning to NYC after blowing up his record company’s advances and some at a beach house and party with Coke in LA, TV Larry comes up set the stage for an appearance in the Big Apple as the pandemic takes root. Keyboardist and brief character Wayne, however, isn’t the decent guy who takes his bandmate out on a morning beach stroll to straighten him out (stop partying! You have a chance to make it!). Here he is a bitter artist who claims Larry got his hook and refrain for the much-mentioned novel “Baby Can You Dig Your Man!” Stolen. Hit single. TV Wayne confronts Larry a second time, but he is too weak from the superflu and Larry lets him die next to his car (but takes his travel bag with drugs out of the trunk in an off-book version).

When the world falls apart and people become scarce, Larry doesn’t stay alone for long. He has a quaint meeting with Rita Blakemoor (Heather Graham) that’s almost (without a zoo) straight from the side. The musician and the slightly older, wealthy New Yorker mate, but their New York exit is improved a bit. Instead of climbing over dead bodies in a dark Lincoln tunnel, the two begin their escape through a rat-infested sewer.

We hope next week’s episode gives us more than a glimpse into Nick and delves deeper into the mindset of the just featured Nadine Cross (Amber Heard).

New episodes of The Stand premier on Thursdays on CBS All Access. For more information on the show, check out our own Vinnie Mancuso review of the opening episodes. We’ll update this post regularly with each new episode.